Our Allies, And How We Won The War. 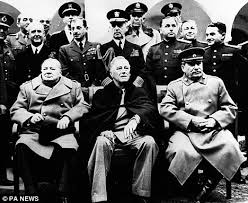 Celebrating the Jewish Victory against Germany.

“Suddenly I heard loud screams, and immediately two Red Army soldiers brought in five girls. The Commissar ordered them to undress. When they refused out of modesty, he ordered me to do it to them, and for all of us to follow him. We crossed the yard to the former works kitchen, which had been completely cleared out except for a few tables on the window side. It was terribly cold, and the poor girls shivered. In the large, tiled room some Russians were waiting for us, making remarks that must have been very obscene, judging from how everything they said drew gales of laughter. The Commissar told me to watch and learn how to turn the Master Race into whimpering bits of misery.

Now two Poles came in, dressed only in their trousers, and the girls cried out at their sight. They quickly grabbed the first of the girls, and bent her backwards over the edge of the table until her joints cracked. I was close to passing out as one of them took his knife and, before the very eyes of the other girls, cut off her right breast. He paused for a moment, then cut off the other side. I have never heard anyone scream as desperately as that girl. After this operation he drove his knife into her abdomen several times, which again was accompanied by the cheers of the Russians.”

Murdered by the Bolsheviks: The bodies of German children;

“The next girl cried for mercy, but in vain—it even seemed that the gruesome deed was done particularly slowly because she was especially pretty. The other three had collapsed, they cried for their mothers and begged for a quick death, but the same fate awaited them as well. The last of them was still almost a child, with barely developed breasts. They literally tore the flesh off her ribs until the white bones showed.

Loud howls of approval began when someone brought a saw from a tool chest. This was used to tear up the breasts of the other girls, which soon caused the floor to be awash in blood. The Russians were in a blood frenzy. More girls were being brought in continually.

I saw these grisly proceedings as through a red haze.”

This is just a tiny part of the atrocities which were carried out by the Russians and their Allies, all of whom were controlled by Jews.  The above extracts are from a book by Thomas Goodrich,  “Hellstorm,” a chronicle of the bestial crimes of the Jews against German Christians, during 1945/7, a time which we were educated to believe was a time of  peace and good will towards all survivors.

Well it was no such thing.  Fresh from their gruesome, barbaric slaughter of  65,000,000 Christians, the Bolsheviks set about wiping out what remained of the German Christians after the British Bolsheviks,  had carried out the monstrously genocidal carpet bombing of every major town and city in Germany, quite deliberately and callously targeting civilians.  This is the stuff of which “War Heroes” are made.  This is the once “Great British Empire” in action.

The photograph of the Conference of Yalta is nothing more than a parade of Jews, fresh from their slaughters, yet not quite satiated,  not quite satisfied with the millions of dead, mostly Christians, mostly civilians all of them innocent of any crime,  so now the coup de grâce, they will simply hand half of Germany and all of Eastern Europe into the hands of their chum, who had been part of the planning of the war from the beginning, the insane,  psychopathic,  mass murderer Joseph Stalin.

This was Stalin’s reward for taking on the task of draining the strength from Hitler’s troops and rendering him vulnerable to an attack on the Western Front.

All of them Churchill, Roosevelt and the French delegation were fully aware of the wholesale slaughter which had taken place in Russia after the Jewish Bolshevik coup d’etat, yet they calmly handed millions more Eastern European Christians into the clutches this monster, knowing full well what their fate would be.

The Russians, behind their “Iron Curtain,”  carried out a pitiless campaign of rape and torture in an effort to wipe the German people from the face of the earth. Our “War Heroes” helped in this slaughter by rifle butting prisoners of war on to trains bound for the Russian Gulags, where unknown millions died a miserable death.

In our day, that nightmare was inflicted on Europe. The same hand is even now decimating the Islamic people before our eyes.  The Muslims are of course, as were the Germans asking for it. as were all of the other poor souls who stood in the way of Jewish/British world domination.

I am ashamed to be part of a generation which is prepared to believe that all of the million of twisted, broken, bloodstained corpses, massacred by an alliance of Christians, under the control of Jews, throughout the twentieth century were deserving of their fate and that the perpetrators of this feast of evil, were noble heroes one and all.

I have been listening to the British Jew,  David Cameron,  who was one hundred per-cent in favour of the destruction of Iraq, Libya and Afghanistan, explain to Parliament, in reply to a question about the Israeli move to create a Racist, Apartheid State in Israel, how he felt that as they were the only Democratic State in the Middle East, that International Law does not apply to them, they have a perfect right to do as they please.

To the shame of this gaggle of scum, the majority of whom call themselves “Friends of Israel,” there were no cat calls or whistles of indignation at this statement by those controlled idiots who are about to pass legislation which will install a UK “no fly list” and the right to shut down any content of which they disapprove on-line.

This is in fact to save the British People from the “home-made” threat of ISIL which was set-up and trained by the British in Jordan and whose  casualties are being regularly treated in Israeli hospitals.

The British Home Secretary informed us that if we do not grant the Security Forces  the right to read all of our correspondence, they will be unable to track down those International Terrorists who are a threat to our way of life.

Which is in direct denial of the truth that they have been so doing  for years and that despite having intercepted a communication from one of the men accused of killing Gunner Rigby in Woolwich, in which he stated that he was “on his way to London to kill a soldier” no action was taken.

Will all of those who believe this sort of twaddle please hold your hand up.

Ever since the days of “Pulp Fiction” when the portable telephone was still a relatively rare device, it was the 12th Commandment that you did not do deals on a mobile device.

We all understand this simple rule, apart from the Terrorists, who despite all of the claims which have been made about their media savvy, they have so far failed to grasp this simple method of avoiding capture and they continue to tell every cop on the planet all of their plans and their location, which can be tracked by the GPS built into their smart-phone.

But none of this is actually necessary because it would appear that they are one and all on the security watch list anyway, which is an indication of them having been invited to help MI6 set up a drill or some such nonsense.

This entry was posted on November 26, 2014 by enochered. It was filed under Political Opinion and was tagged with Churchill, George Galloway, Hitler, ISIL, Israel, MI6, Racist State of Israel, Roosevelt, Stalin, Syria, Yalta.