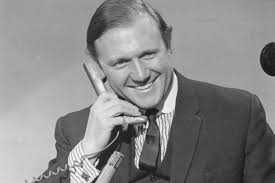 How can we ever forget the glory days of  It’s a Knockout, when Stuart Hall and his gritty chum Eddie”Up and Under,” Waring were the commentators?

Stuart Hall was the drinking companion of George Best, probably the best footballer the world has ever seen.  In all fairness Stuart Hall was excellent at his job, as he was in later life as a Match Commentator.

This makes it all the more painful to see him arrested in his dotage, for allegedly abusing young children, especially so soon after Lord McAlpine was left, uninvestigated, after he too had been implicated, by the Police themselves in paedophile activities. Lord McAlpine, a rich man, received one hundred and eighty-five thousand pounds of licence-payers money, from the BBC, while the child whom was most certainly abused by someone, was left with nothing.

Such is the way the law operates in the UK. Low-level offenders are picked out and used to screen the real problem, most of which takes place in Masonic Lodges and involves the likes of  high level politicians whom are never brought to Court and whom are left free to carry on as before, while attempting to change the law to make their obscene behaviour legal.

For What Did The BBC Pay Lord McAlpine?

Lord McAlpine, whom was named as one of a group, whom abused children in the North Wales Paedophile Scandal, has received one hundred and eighty-five thousand pounds in damages from the BBC, in an out of Court settlement, because he claimed that their reference to a name which could be found on-line, was in some way libellous.

We were told that the BBC agreed to pay this sum, in order to avoid litigation. On what grounds would this case be based? The BBC did not name McAlpine, it was the North Wales Police whom named McAlpine, to a youngster whom had been abused.

There has been no sign of the actual photograph, which had been shown to the boy and the name of the person has not been divulged.  We have been left to guess as to whether the identity of the suspect in the photo was a relative of McAlpine, whom has been implicated in the sordid affair but whom is now dead, or maybe it is yet another Toff, whom may have been amongst the alleged offenders, whom could possibly sue the BBC in turn. McAlpine is not the only alleged possible offender, whose name may well have been on-line for years. Does McAlpine have proof positive that he was targeted more than others, when the BBC suggested that “a name” could be found on-line?

I get the impression, that the BBC has paid a large sum of Licence Payers money to give the impression that with or without evidence, without any proper enquiry, that a man whom was named by the Police in Wales, is innocent.

Perhaps I need straightening out on the twists and turns in the law of libel. Personally I found it difficult to pin down a direct reference to Lord  McAlpine and the abused boy, whom is now a man. It was not until his name appeared in the Press that I became aware that it was he. So why is the BBC paying?

The Elusive Paedophile Member Of A Past Prime Ministers Cabinet.

Take a look at a photo of Margaret Thatchers Cabinet and I bet you pick out the same suspicious looking character as I have. No not that one.

An awful lot of people must have thought that Savile would never die.

Could someone please put a name to this face Its on the tip of my tongue, it’s..it’s.. Go on help me out.

“We were supplied with copies of court documents…there was an order made for the book of photos to be destroyed.

“They were. Well that’s what’s in court papers – official documents.”

We are now expected to accept, that a dead member of the McAlpine family whom was not arrested by the police, was the abuser in question, while his cousin can threaten libel action to prevent further investigation.

One way or another we are being prevented from digging out the truth of the sordid behaviour of the “Toffs.” We have not even been given access to the two photographs, which were involved in the Police deception.

Jimmie McAlpine was not alone in the North Wales child abuse scandal, why did it take a just a few words from one of the victims, to spur the police into presenting another photograph? Why would it have occurred to them that there may have been a confusion, if they had not been party to the deception in the first place?

It has recently become apparent, that the police will destroy or tamper with evidence to pervert the course of justice, in any investigation in which “Toffs,” are implicated, all of this present carry on  sounds just a little bit fishy, showing a remarkable resemblance to the massive cover-up of the Blair governments behaviour in the Dunblane Massacre.

I have removed one of the photographs which was posted here, because there appears to be some doubt as to which member of the McAlpine family was indeed involved in a serious case of paedophilia. I will be looking into this and will update as soon as possible.

It would appear that the real question ought to be, was there anybody whom was not a paedophile in the Government of Margaret Thatcher?

This trio earns their place on the roster of filth, because they are not simply paedophiles but aggressively so. Around this bunch there is even talk of the killing children, in search of some sort of sadistic pleasure.

Many excuses have been offered, to afford some sort of acceptability to this form of sexual perversion, it has been claimed that an insight into the mechanism of the universe can be found, through the inspiration which comes from the shock of seeing the sudden, bloody death of a child. This inspiration can include the gaining of arcane knowledge which can unlock the hidden mysteries of science. Yeh right!

The strange look on David Cameron’s face in Parliament, when he was confronted with the statement of Tom Watson, concerning a paedophile ring in Downing Street, was most likely provoked, by the recent decision to recall a member of a “previous Prime Ministers Cabinet,” whom had been banished to the European Commission after having been questioned by Police, when a half-naked, frightened boy stumbled from the Members home into the arms of the Police.

He is to join the coalition, in an effort to find even more swinging means of robbing the people to pay their friends in the City of London. Cameron must have been having an Andy Coulson moment, thinking “Oh no not again! Can I deny it?”

There were many other Members of the House of Commons and the House of Lords, whom were named in the Ore report, which has been placed out of sight. It included evidence that the Police had known all about Jimmy Savile since at least nineteen-ninety-five.

This is the sorry state of affairs in British Politics and all of it hidden under D Notices. Including an unknown number of killings. What can you expect when you discover that even the Police whom were sent to support the families whose daughters were killed in Soham, were themselves paedophiles. Soon we will be running around shaking people and telling them not to go to sleep, in case they wake up as Nonces.